Doors are indispensable to any property, which are used to connect areas like two rooms or the exterior and interior of a house, and they can be various in materials, structures, styles, etc. Even though doors are wildly used in our daily life, people still know little about the structure of a door.

When it comes to a door, people usually regard it as just the door leaf itself. Actually, the combination of the door frame, door leaf, and hardware together should be considered an integrated door system.

What is a door frame?

It is a combination of parts or elements like head jamb, side jamb, mullion, etc., which is in connection with the door leaf. Residential door frames are most often made of wood but can also be made of aluminum, steel, or composite material. Following is a wooden door frame diagram, for example. 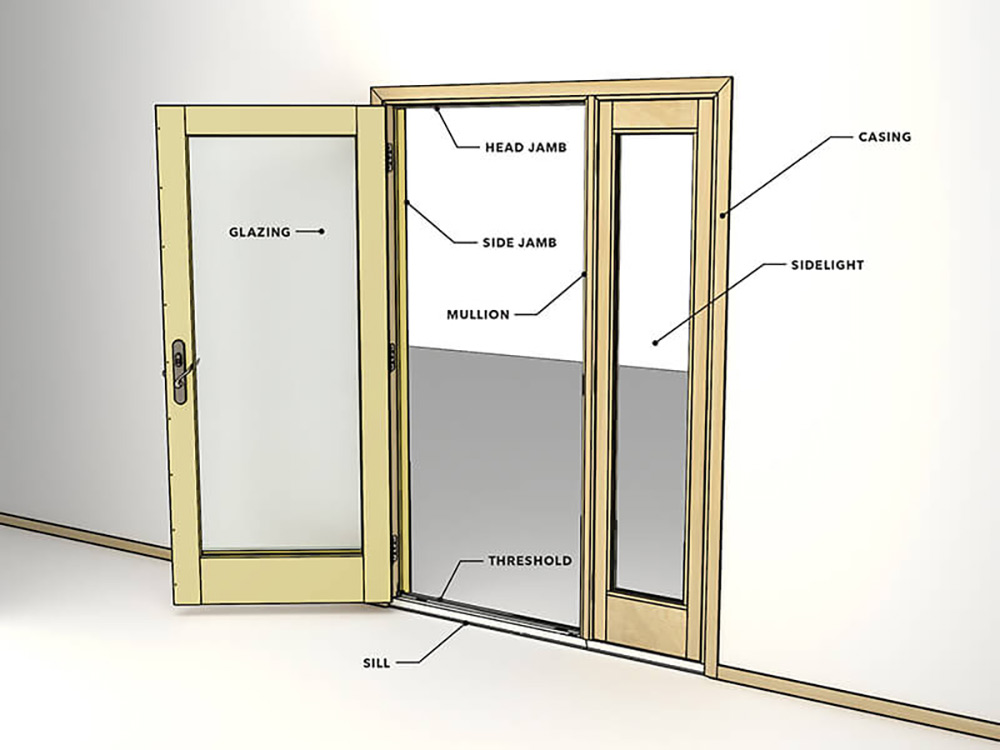 The definition of different parts in a door frame

Mullion: A mullion is a part of the frame which separates door leaves, a door, and sidelite, glazed areas, or paneled areas. Mullions are primarily a structural element but have also been used as a decorative element in some architectural styles. In this case, the mullion is a vertical bar between the door and the joined sidelite that supports the whole door frame. 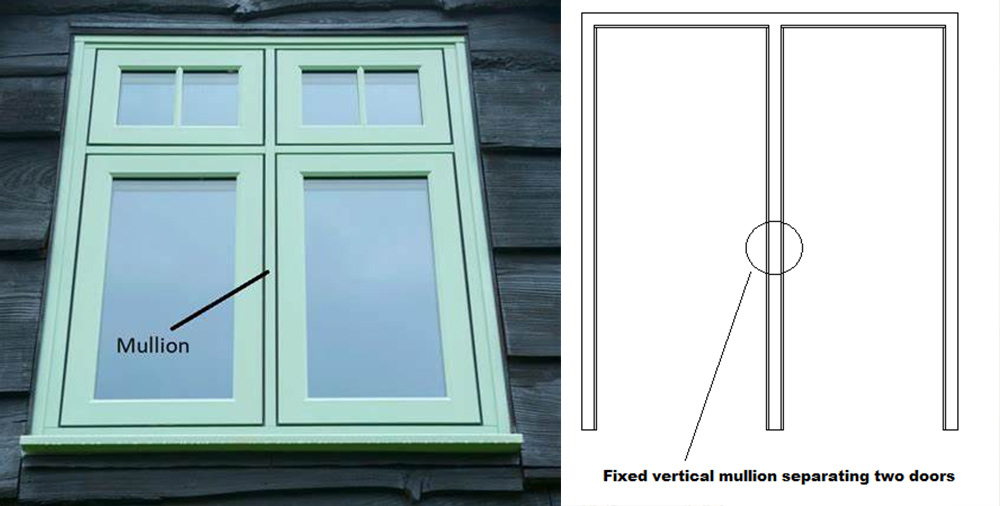 Casing: Door casing is designed to cover the gaps between a door frame and the surface of  interior wall, it is functional and decorative.

Sidelite: A sidelite, can be concluded as a window that’s designed to sit alongside a door. A single glazed pane or multiple glazed panes divided by mullions and allow more natural light to get into the house.

Sill: Sill is the bottom component of a door frame. It is a part of the door that gets sealed and fastened to the floor. Only exterior doors (like front doors, garage doors, and those that lead to the outdoors) have sills.

Threshold: As for the threshold, it sits on top of the sill and is typically sloped toward the outside to help shed water. 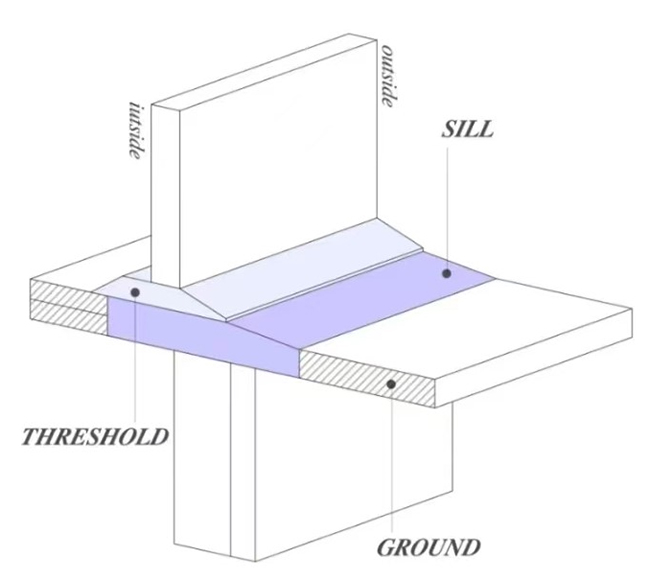 The sill and threshold are parts of an exterior door frame.

Not only the door frame, but the various parts on the door leaf are also named properly. 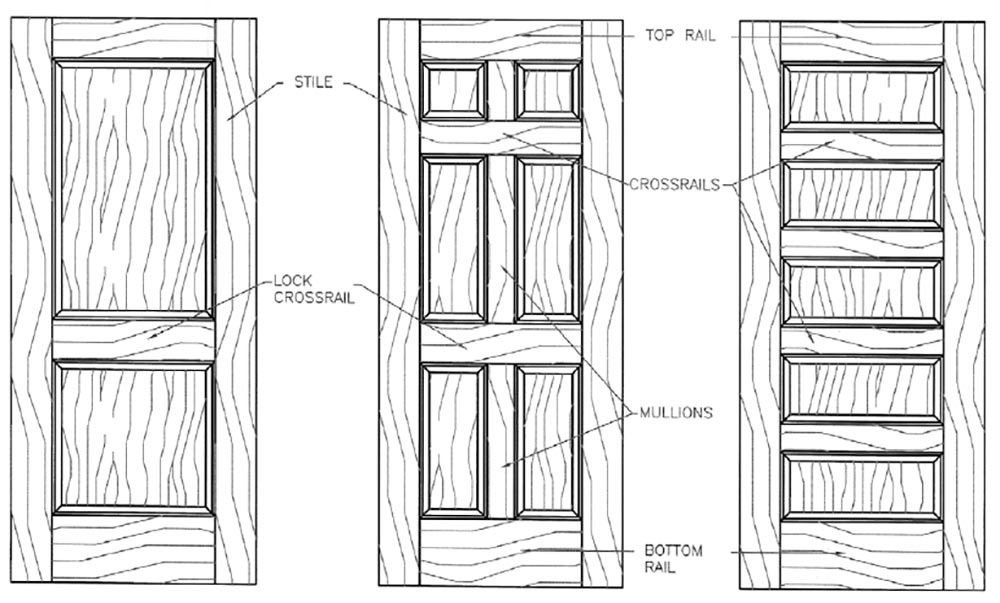 Top rail – The top rail is the horizontal piece that sits across the top of the door.

Middle rail(Lock rail) – It sits horizontally across the middle of the door or at the height of the lock. But not all doors have a middle rail.

Bottom rail – Sits horizontally across the very bottom of the door.

Stile(Hinge stile) – This is the collective name for the vertical components that sit on the outside edge of a door.

Lock stile – This is the vertical edge of the door which sits on the opposite side of the door to the hinges, and contains the lock or latch. Not all doors have a lock stile.

Mullion – A vertical member used to separate panels, and it can be divided into top mullion, mid mullion, lower mullion by the position on a door.

Panel – The panels, which can be timber or glass, set between the stiles, rails and mullions of a door.

Besides door leaf and door frame, the hardware is also a significant part of a door which includes door lock, door latch, handle, etc. For more information about those items, please skim the corresponding blogs on www.nbtengyu.com.

From the information above, we must have a general idea about the structure of a door system. As for steel frame door or window, there are a lot of parts in common with wooden door about the use of terminology. Let’s discuss their similarities and differences. 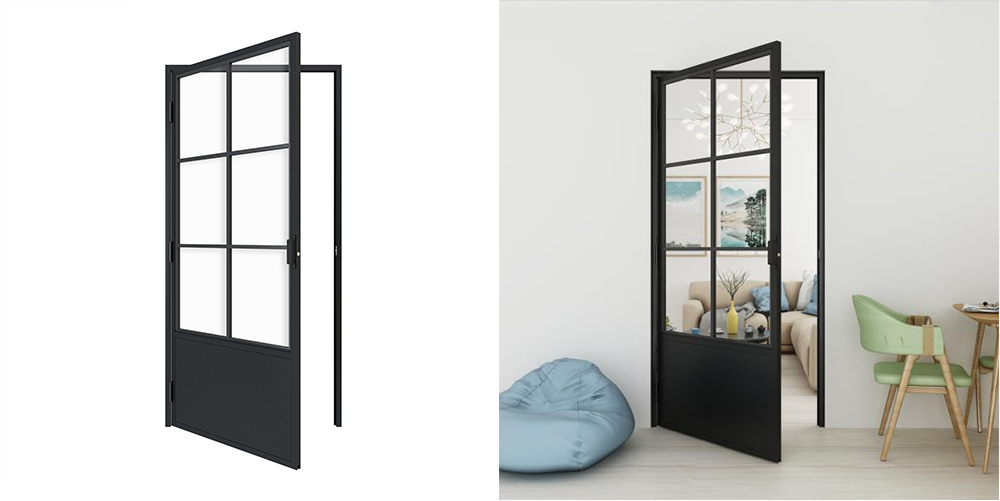 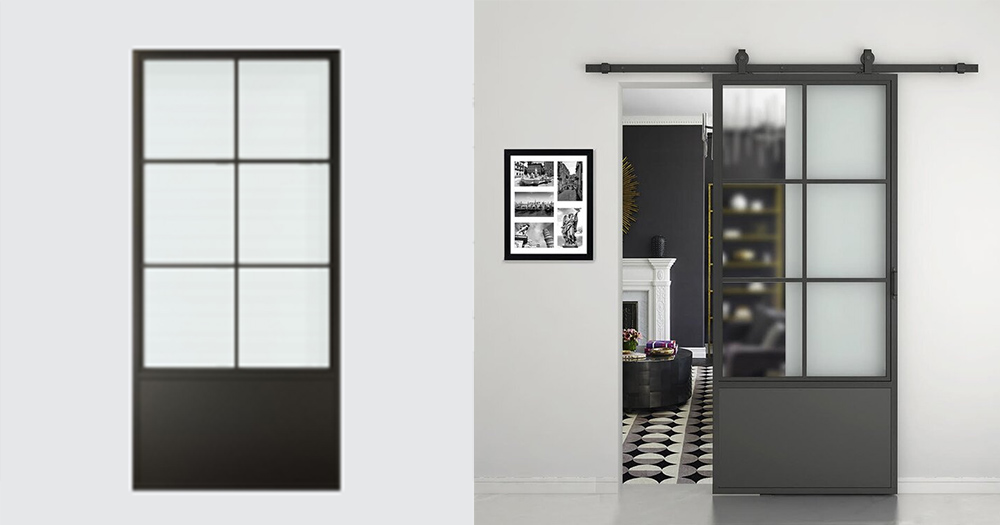 This type can be a swing or sliding door. One obvious difference is that only swing door has a door frame and sliding door doesn’t.

For swing door, the door frame is necessary to hold the door leaf, but in sliding door system, the door is function with the siding hardware kit which plays a role like the door frame.

When it acts as a swing door, it has a door frame like a wooden door but the structure is simpler. The door frame is combined with a head jamb and two side jambs. And it does not have a sill or threshold as an interior door system.

When it acts as a sliding door, the door leaf will be fixed with the sliding roller and hang on the sliding rail.

When it comes to the door leaf, some terminologies like stile(on a swing door it can be hinge stile or lock stile), top&bottom rails are available on a steel frame door as well, and some new parts can also be found that are different from the wooden door.

Kickplate: A metal plate at the base of a door or panel to protect it from damage or wear.

Muntin: The framing that is used to separate and hold pieces of glass within a door or window is called a muntin, sometimes called “muntin bars”, “sash bars”, or “glazing bars”. But some muntins are just decorative elements, they don’t actually separate the glass panel, those are called imitation muntins.

Lite: A door lite is a glass panel set inside a door. Each panel is considered a separate lite.

A glass panel can be separated into small lites by horizontal and vertical muntins. 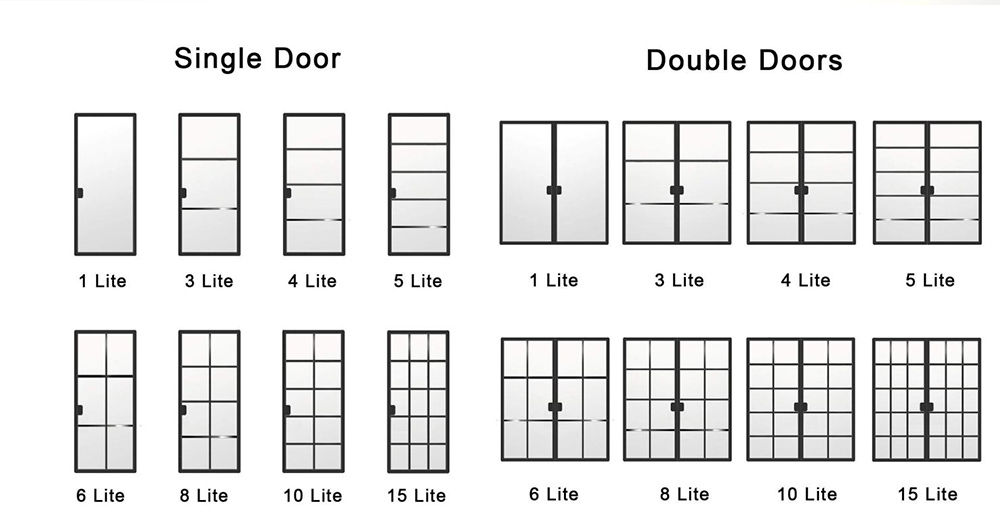 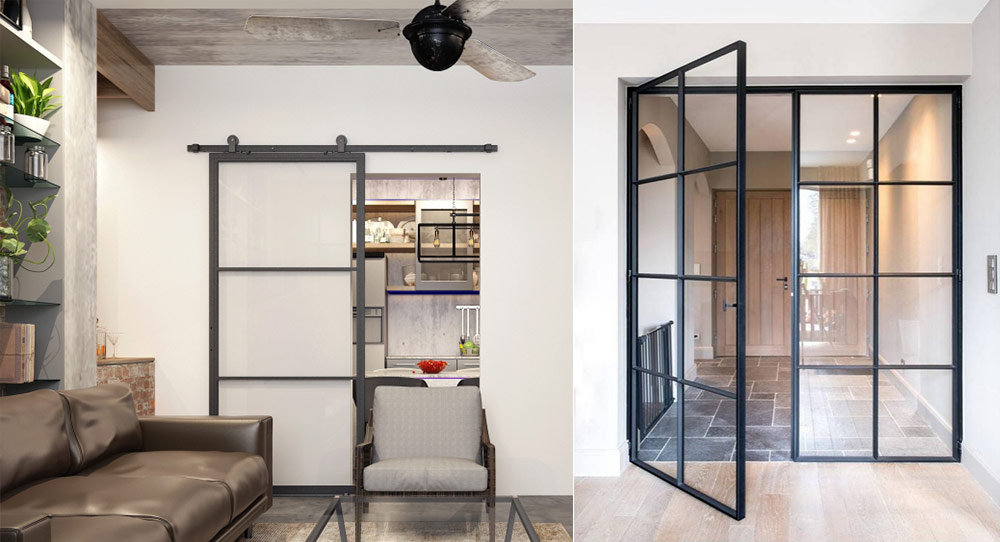 Besides the parts and elements above, there is a special part in a complete door system. It is transom window.

What Is a Transom Window?

A transom window typically appears above a door frame and provides additional natural light into an entryway or room. Transom windows are named as such because they are located over the top of a window or door’s transom– this is the beam that separates the top of the window or door from the rest of the wall.

This is a steel frame double swing door with a 4-lite square transom window and two sidelites.

And the styles of transom windows can be square(the most common type), round, and arch.

Transom window is typically appear above front doors, but they can also appear in bathrooms, kitchens, inside homes, and above garage doors. It is an innovative option for your interior & exterior doors. 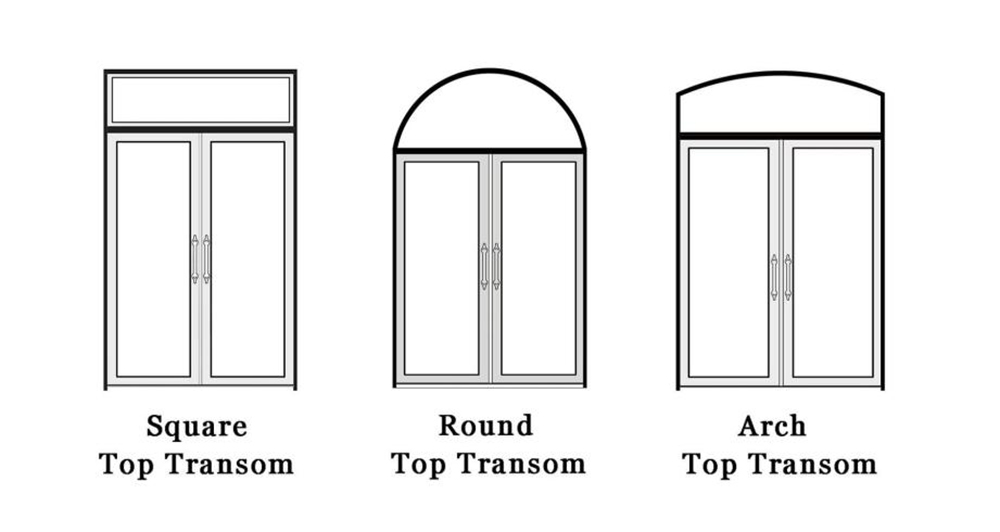 Same as door, the window also plays a significant role in your property. So how about the anatomy of a window? What are the different parts of a window called?

Most windows have two main components, the frame, and the sash. The frame is the outermost area or casing of the window, and inside it are the sash and the glass. The sash is the area inside the frame, the part that holds the glass. Just the same as a door leaf to a door frame.

Two of the most common styles of the window are casement and sash.

What are the casement window and sash window?

Casement window: It is equipped with hinges that allow the window to swing open and close. The casement usually comes into pairs that open away from one another, just like a double-swing door.

Sash window: Sash windows consist of one or more panels, or sashes, which slide vertically or horizontally to create openings. Simply put, it can be divided into hung windows and sliding windows.

Following are the anatomies of these two types of window 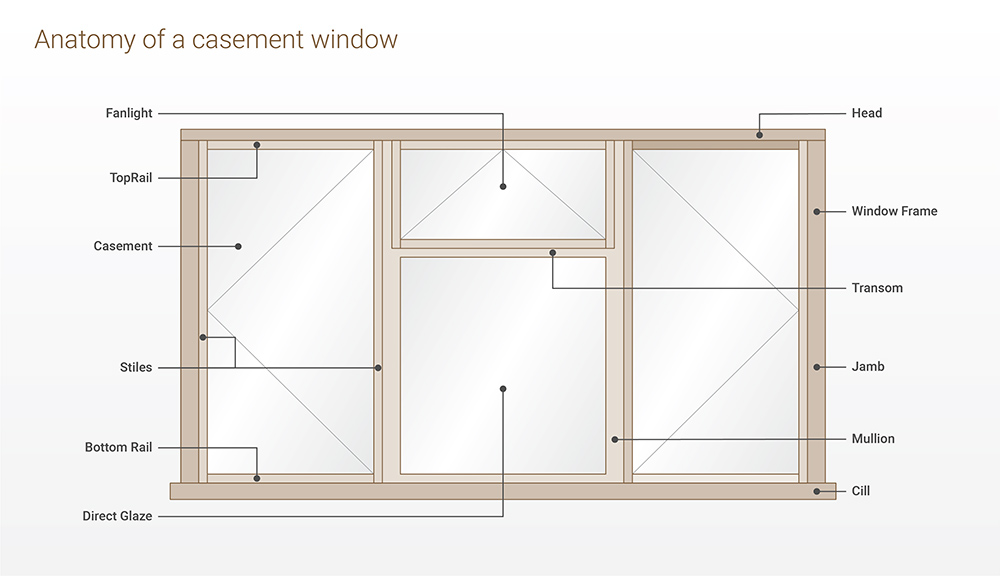 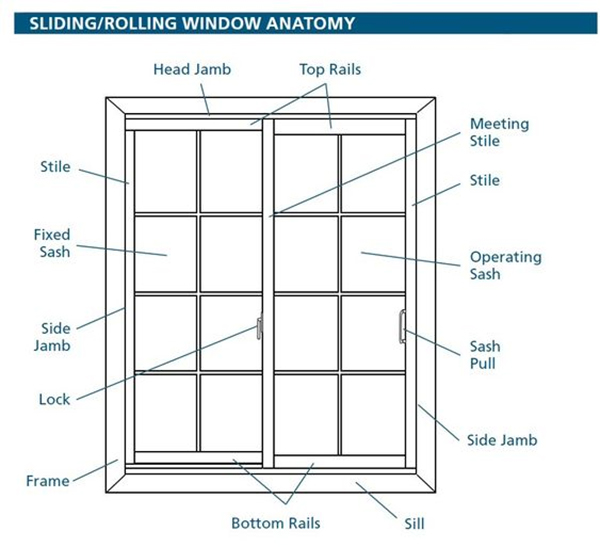 Compared with the anatomy of wooden door frames and leaves, there are a lot of parts in common. Especially the frame them. Top&bottom rails, side jamb, and head jamb also appear on a window frame.

But there are some differences in the window. On a casement window, the window is called “casement”. On the sash(sliding) window, it is called “sash”.

In the anatomy of a casement window, there is a fanlight, which is similar to a transom window on the door.

In the anatomy of casement window, the stiles of two sashes that overlap one another is called “meeting stile”. And the muntin can also be called “grill”.

Hope this blog will bring you a general understanding of the structure of various doors & windows.