Doors constitute an essential feature of our buildings. They ensure privacy, security, and comfort within a building.

Notwithstanding these features, it’s easy to think nothing is interesting about them. In this article, we want to challenge that idea and show that there are many fascinating things you can learn about doors.

We start by providing a wider perspective about doors using general statistics. The article then provides a brief history of doors. This is followed by a section with fascinating statistics about doors, including the number of doors in an average house, the world’s heaviest and tallest doors, and how doors can facilitate or prevent heat loss.

This article will also provide statistics related to crime and burglaries. Finally, we focus on the global door market size and the future of the door industry.

We hope that these fascinating facts will encourage you to select the best door for your home and look after the ones already present.

Some Quick Statistics and Facts

What’s Behind a Door?

A door can loosely be defined as a movable (usually hinged) barrier that allows or prevents one from entering or exiting a building. The place covered by the door is known as a doorway, entrance, or portal.

Consequently, any panel fitting into a doorway qualifies to be called a door. Doors serve several purposes, including allowing people to enter and leave a building, dividing interior sections of a house, securing contents, communicating anger (when you slam it in someone’s face), or protecting the people in a building from the elements.

In a program focusing on the hidden history of the front door, the British Broadcasting Corporation’s Radio 4 says that the door is not just a way of entering and leaving a house. Instead, the British broadcaster posits, “The style of door, its color, the letterbox, doorbell, even perhaps the house name, are all chosen to present an image to the outside world.”

A Brief History of the Door 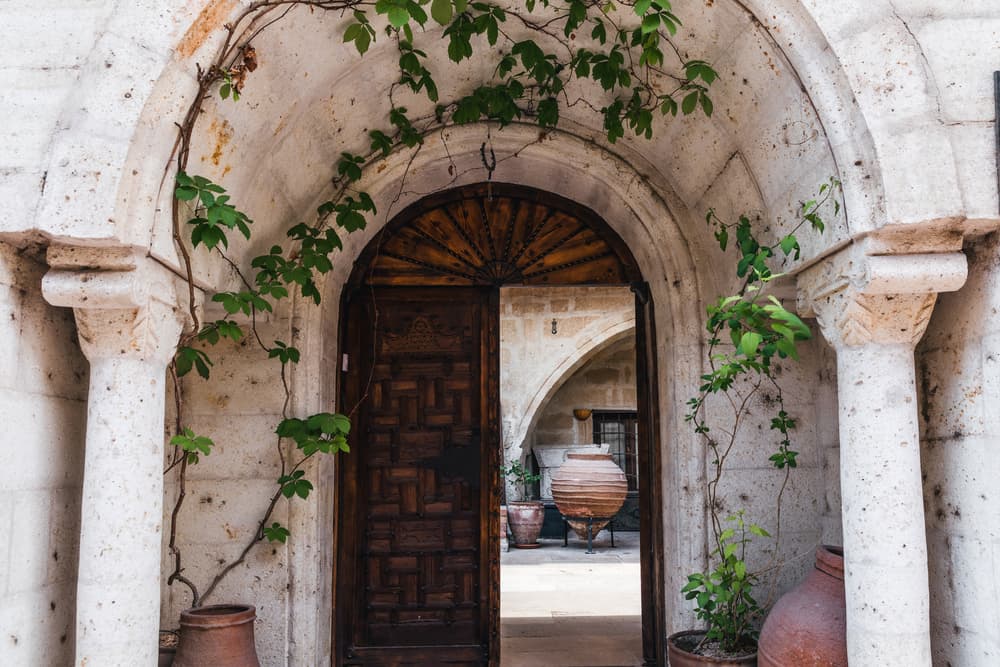 A door can be made of different materials, including hides, leaves, paper, textiles, glass, metal, or wood.

According to the Encyclopedia Britannica, stone doors were used as early as AD 200. The same source refers to “A marble, paneled example, probably from the time of Augustus … found at Pompeii; a Greek door … from a tomb at Langaza, Turkey, [which] has been preserved in the museum at Istanbul.”

Many sources agree that the history of the wooden doors we commonly use today can be traced back to Egypt and Mesopotamia about 4,000 years ago.

The Encyclopedia Britannica reports that the domestic interior double doors started appearing in Europe and American colonies around the 15th Century. Doors would continue to develop over the centuries leading to the folding, revolving, and sliding doors common in today’s buildings.

How Many Doors Does an Average Home Have?

The Florida-based broadcaster WUSF.org reports that after noticing that it was selling fewer doors, a US-based company decided to analyze home plans from the five leading home builders in the US, to see if they could explain why the decline was occurring.

WUSF.org cites the company’s CEO, who says, “The base in our data, which include different size homes and some multi-family units … put the average number of doors at about 19.” The CEO adds, “We assumed 21 doors in the past for midsize homes.”

The broadcaster reports that the data analysis also revealed that “…first-time buyers prefer smaller homes–about 2,500 square feet.” As can be expected, smaller houses have fewer doors.

How Many Doors are in The World

On March 5, 2022, Ryan Nixon’s tweet sent the Internet into a frenzy. The New Zealand native tweeted, “My mates and I are having the STUPIDEST debate… And I am here for it. Do you think there are more doors or wheels in the world?”

To show how interested people were in the answer to this question, Nixon’s question received 223,347 votes. So, did we learn anything about the number of doors in the world from all this activity?

Apparently not. Many people attempting to answer Nixon’s question got entangled in arguments around what can be called a door, whether we should include car doors when we count doors, and so on.

The review website Red-redial.net estimates that there are about 42 billion doors worldwide. It’s not easy to tell how they arrive at this figure.

Jerry Insurance Agency estimates “that there are as many as 33 billion doors in the world, between houses, apartment buildings, vehicles, and the cabinets, closets, and other compartments inside them.” 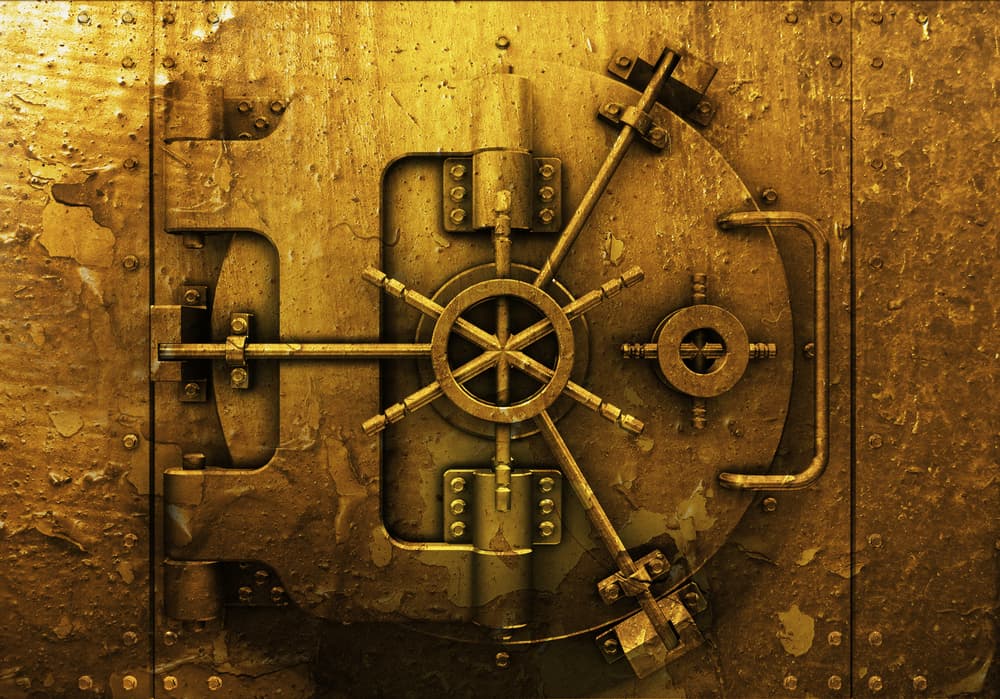 An average door is estimated to weigh about 50 pounds, but some doors are thousands of times heavier than this.

Below are three examples of some of the heaviest doors in the world:

According to Nasa.gov, the Vehicle Assembly Building, or VAB “Kennedy Space Center in Florida, is the only facility where assembly of a rocket occurred that carried humans beyond low-Earth orbit and onto the Moon.”

The VAB is also famous for having the world’s largest door, standing “456 feet high [139 meters] and [taking] about 45 minutes to completely open or close.” To get an idea of this door’s height, let’s remind you that the Statue of Liberty in New York stands at 93 meters.

In an article published on Cnet.com, Daniel Terdiman writes about the double blast doors at Cheyenne Mountain, the place known as “America’s Fortress.”

If the place is indeed America’s Fortress, it’s not surprising that its doors weigh 25 tons. The surprising thing mentioned by Terdiman about this door is that it can be closed by just two people.

If you were asked to design the building called the Bank of England, one of the primary considerations would be the integrity of the door to the gold volt. After all, the volt holds more than 400,000 bars of gold, with a value of more than £200 billion ($223 billion).

The types of doors at The Bank of England’s gold vault weigh more than 20 tons. The vault is opened using voice recognition technology and three keys with a length of around 0.5 meters each. 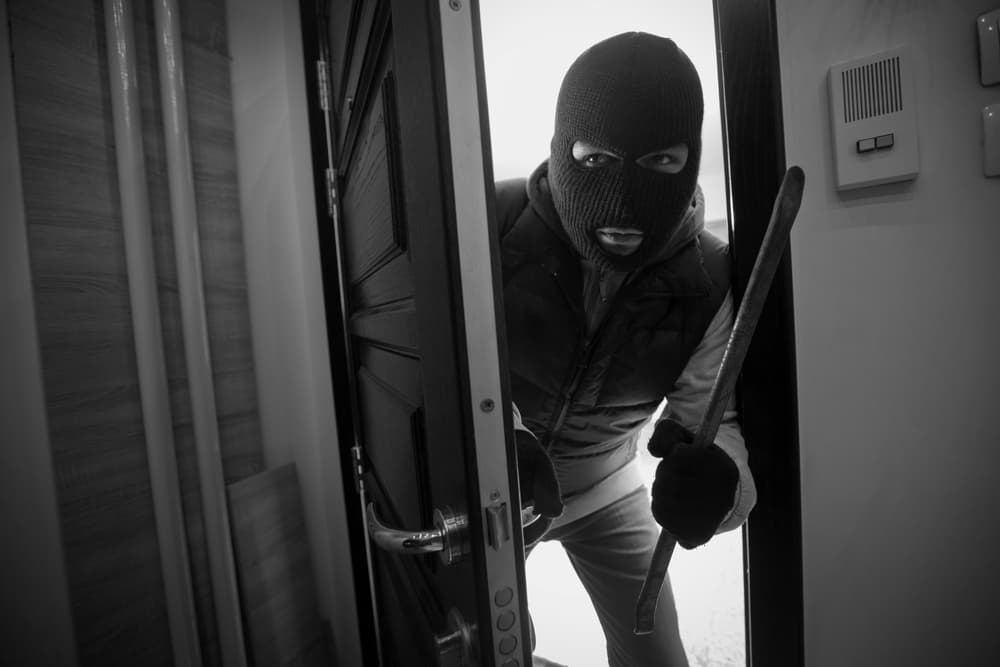 How often do you wake up in the middle of the night worried that you may not have locked your door? Considering that over one million burglaries occur annually in America, you would understand why many people want to ensure every door in their home is locked when they go to sleep.

The security services and technology provider ADT put together statistics showing the relationship between doors and burglaries:

One of the common entrances that burglars use to access a home is the garage door. The provider of smart home devices, Aeon Matrix, suggests that the garage door is one of the burglar’s favorite entrances because some homeowners don’t pay attention to it.

The US Department of Energy estimates that air leaks around doors account for 11 percent of heat loss in a typical home.

Olivia Heath of the home magazine, HouseBeautiful.com, advises homeowners to use draught-proofing strips between doors and frames, both externally and internally. She suggests “a special ‘brush’ or hinged flap draught excluder” for gaps between the bottom of the door and the floor.

Global Markets Insights reports that the “Doors Market size [was] valued at USD 140.5 billion in 2020 and will grow at a CAGR of around 5.4% from 2021 to 2027. The same source adds, “The growth in commercial infrastructure development [will] promote product demand.”

Global Markets Insights forecasts that consumer expenditure power is expected to continue benefiting from the overall economic growth. This growth is also likely to encourage activity in the housing market.

12 of The Most Fascinating Hidden Doors Around The World

Barn doors are very popular in decoration in recent years. Over the years we have refined and introduced metal frame …